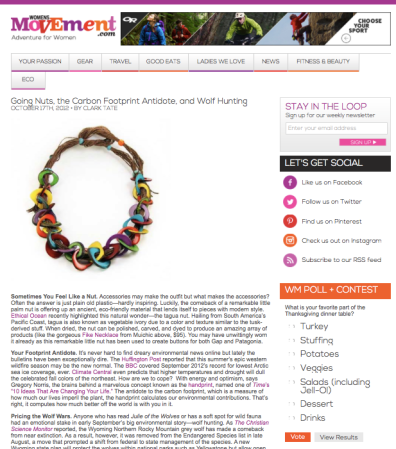 Sometimes You Feel Like a Nut. Accessories may make the outfit but what makes the accessories? Often the answer is just plain old plastic—hardly inspiring. Luckily, the comeback of a remarkable little palm nut is offering up an ancient, eco-friendly material that lends itself to pieces with modern style. Ethical Ocean recently highlighted this natural wonder—the tagua nut. Hailing from South America’s Pacific Coast, tagua is also known as vegetable ivory due to a color and texture similar to the tusk-derived stuff. When dried, the nut can be polished, carved, and dyed to produce an amazing array of products (like the gorgeous Fike Necklace from Muichic above, $95). You may have unwittingly worn it already as this remarkable little nut has been used to create buttons for both Gap and Patagonia.

Your Footprint Antidote. It’s never hard to find dreary environmental news online but lately the bulletins have been exceptionally dire. The Huffington Post reported that this summer’s epic western wildfire season may be the new normal. The BBC covered September 2012’s record for lowest Arctic sea ice coverage, ever. Climate Central even predicts that higher temperatures and drought will dull the celebrated fall colors of the northeast. How are we to cope?  With energy and optimism, says Gregory Norris, the brains behind a marvelous concept known as the handprint, named one of Time’s “10 Ideas That Are Changing Your Life.” The antidote to the carbon footprint, which is a measure of how much our lives imperil the plant, the handprint calculates our environmental contributions. That’s right, it computes how much better off the world is with you in it.

Pricing the Wolf Wars. Anyone who has read Julie of the Wolves or has a soft spot for wild fauna had an emotional stake in early September’s big environmental story—wolf hunting. As The Christian Science Monitor reported, the Wyoming Northern Rocky Mountain grey wolf has made a comeback from near extinction. As a result, however, it was removed from the Endangered Species list in late August, a move that prompted a shift from federal to state management of the species. A new Wyoming state plan will protect the wolves within national parks such as Yellowstone but allow open wolf hunting throughout much of the rest of the state. Reactions have varied and this controversy is but the latest in a long line of questions to be asked about endangered species. The Zoological Society of London recently debuted a thoughtful book entitled Priceless or Worthless?, which tackles the issue of endangered species in a new and very pragmatic light. The book, available free online, challenges all of us to decide what we think endangered species are worth.