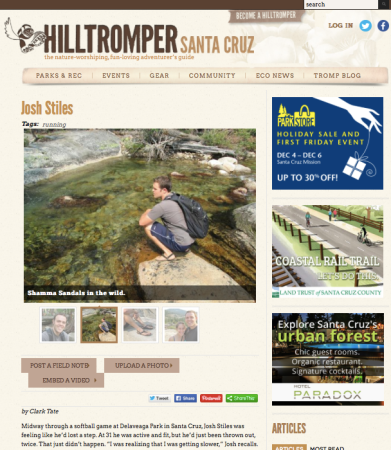 Midway through a softball game at Delaveaga Park in Santa Cruz, Josh Stiles was feeling like he’d lost a step. At 31 he was active and fit, but he’d just been thrown out, twice. That just didn’t happen. “I was realizing that I was getting slower,” Josh recalls.

Two other memories stand out from that game. A player rounding the bags after a routine second base hit “turned on another gear” and easily made third. Stiles remembers the runner’s style as incredible to watch, effortless. Then there was the guy playing ball in surfing booties. Well, not quite; they were Vibram five finger shoes (a.k.a. VFFs), but back in 2010 those were novel enough to warrant such confusion.

Stiles was intrigued. He began to research running, specifically the barefoot or minimalist style that VFFs promote. He discovered and devoured the book Born to Run, a national bestseller describing Mexico’s ultra-running Tarahumara Indians, who run in huaraches. What he found sparked a paradigm shift. “I’m at a turning point in life,” he says today, three years after the journey began, remembered as “the year the Giants won the World Series.”

Stiles still doesn’t run every day. He’s too busy. A self-described “Joe Pro,” he does a little bit of everything, including spending QT with his lovely wife Jenny and three kids. Still, he logs 25 to 30 miles a week—a significant change from the 9 to 10 miles he used to begrudgingly slog. Stiles credits this change to learning that running well is about technique and that “regular shoes are sort of destroying people’s natural gait.” A light came on; he went for a run barefoot. “I could feel it. ‘It’s not hurting my knees, it’s not hurting me. It makes sense.’” He hasn’t looked back.

Sole Rebel
The problem, in Stiles’s well-researched view, is that conventional shoes keep your feet from working, moving, flexing. “The question is not how I stop it from doing all these things, it’s how do I free my foot?” he asserts. “Our feet actually work great.”

What comes after freedom? Gear—in this case minimalist running shoes. Stiles has tried quite a few. “It’s a mini-arms race right now,” he says. The classic VFFs, Merrell’s Trail Glove, the New Balance Minimus, even a pair of JC Penny moccasins, with the stuffing ripped out of course. He liked the Luna sandals made by Barefoot Ted (a character featured in Born to Run). In fact, he liked them all. “Really, you just need something to keep your skin from rubbing off,” he says. And how hard could that be?

His father-in-law, Mike, first encouraged him to make his own running sandals. “They were horrible and floppy, but who cares?” Stiles says. He was off and running.

Many iterations later, the flop is gone and Stiles’s Shamma Sandals are gaining some traction. Handmade with Vibram soles cut out of flat, very dense, incredibly light 6mm neoprene and nylon or leather straps, his sandals are called cruisers, the Super and the Jerusalem. They are as fun as they sound and way more comfortable than you’d believe.

The first few minimalist runs will leave your lower calf incredibly sore as it engages muscles neglected by contemporary running shoes. But, while it’s very important to start slow, it’s exciting to witness the gradual strengthening of muscles you seriously didn’t know you had. Foot muscles (go on, flex ‘em) are also activated at a whole new level. As Vibram and Harvard University researchers both attest, “a healthy foot is a strong foot.”

It’s a new and intimidating world, and Stiles, a “soul runner” who holds master’s degrees in theology and marriage and family counseling, is easy on the newly initiated. The conversational pace encouraged by barefooting—the more conscious footfalls result in a slower gait, which eventually feels more like a glide—allows for plenty of chatting. Stiles explains running form using fun visuals in a calm voice with undertones of extreme enthusiasm. He’ll encourage you to imagine your feet as sensitive hands, kneading cat paws, or flippers just flitting across the ground while your major muscle groups hit cruise control. He tells you to relax, stop thinking, enjoy. “Just take your shoes off,” he says. Your body already knows what to do.

New Shoe Worldview
This journey hasn’t just upped Stiles’s weekly mileage and his shoe collection, it’s permeated his worldview. He reasons that, like addicts, most of us try to mask small discomforts in our lives—a scratched foot, creaky knees, tired legs—by reaching for modern conveniences such as high-tech running shoes, chairs and cars. Stiles would say a stubbed toe “hurts but it doesn’t harm.” The tradeoffs do. Decades of crashing down on our heels in traditional running shoes can wreak havoc on joints, sitting in chairs instead of squatting hinders our flexibility, avoiding exercise harms our long-term heath.

“I think that fitness is more about, basically, continuing to move,” Stiles surmises. So sure, he’s slowed down a little. But that doesn’t mean he isn’t enjoying the pace.